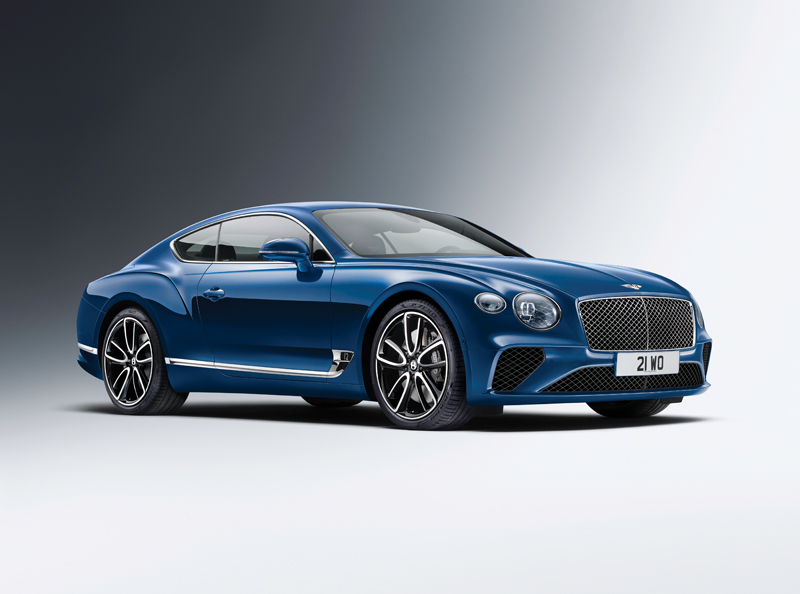 Unveiled at the IAA Frankfurt Motor Showlast month, the new Bentley Continental GT offers bolder and sleeker looks, enhanced luxury, the latest in-car technology and even greater performance than ever.

The Continental name has been used on various Bentleys over the decades, but the first of the latest model was born in 2003 after VW bought the British firm. The first car was built on the same platform as the VW Phaeton – a luxury VW that never really made it. The new third-generation Continental GT is based on the same VW Group MSB platform that underpins the latest Porsche Panamera. That augurs well for some outstanding Grand Tourer handling. The new adaptive chassis also uses Bentley’s intelligent 48-volt Dynamic Ride System, first seen on the Bentayga SUV,for enhanced handling and refinement in all road conditions. 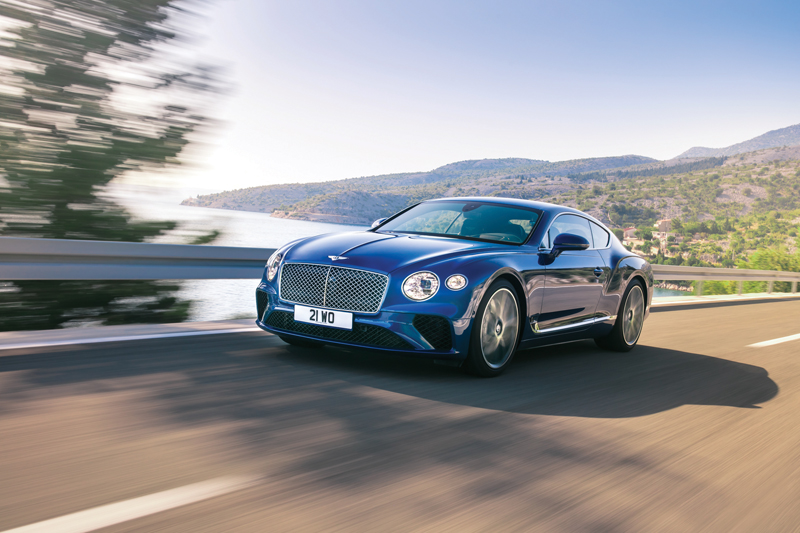 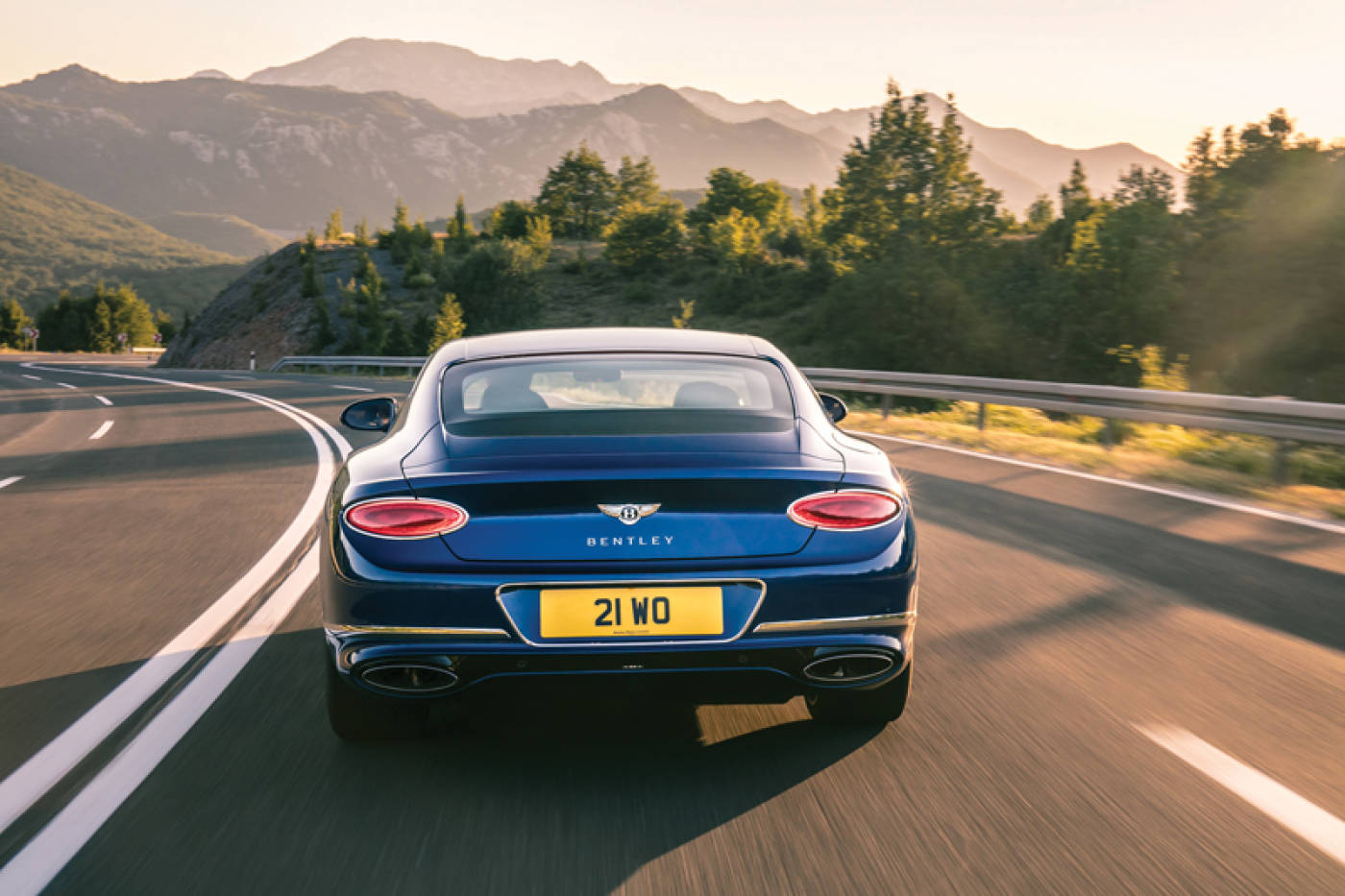 Ingenious metal forming technology has given the car a slimmer profile than the model it replaces. It retains the classic elegance, but the new car is more sculptural and sharply defined and takes much of its inspiration from Bentley’s 2015EXP 10 Speed 6 concept car. The aluminium skin has been crafted using Super Formed technology – a precision technique working with aluminium heated to 500°C. This method allows designers to create more complex, sharply defined body lines and deeper, sculpted haunches. 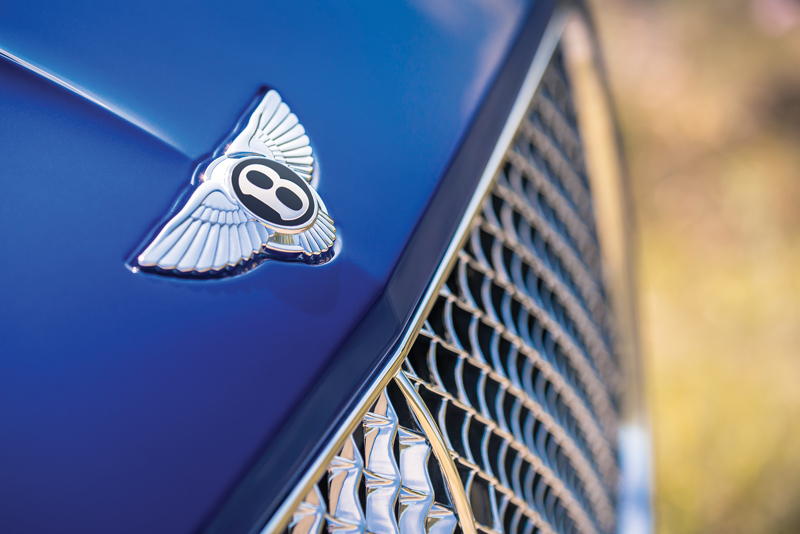 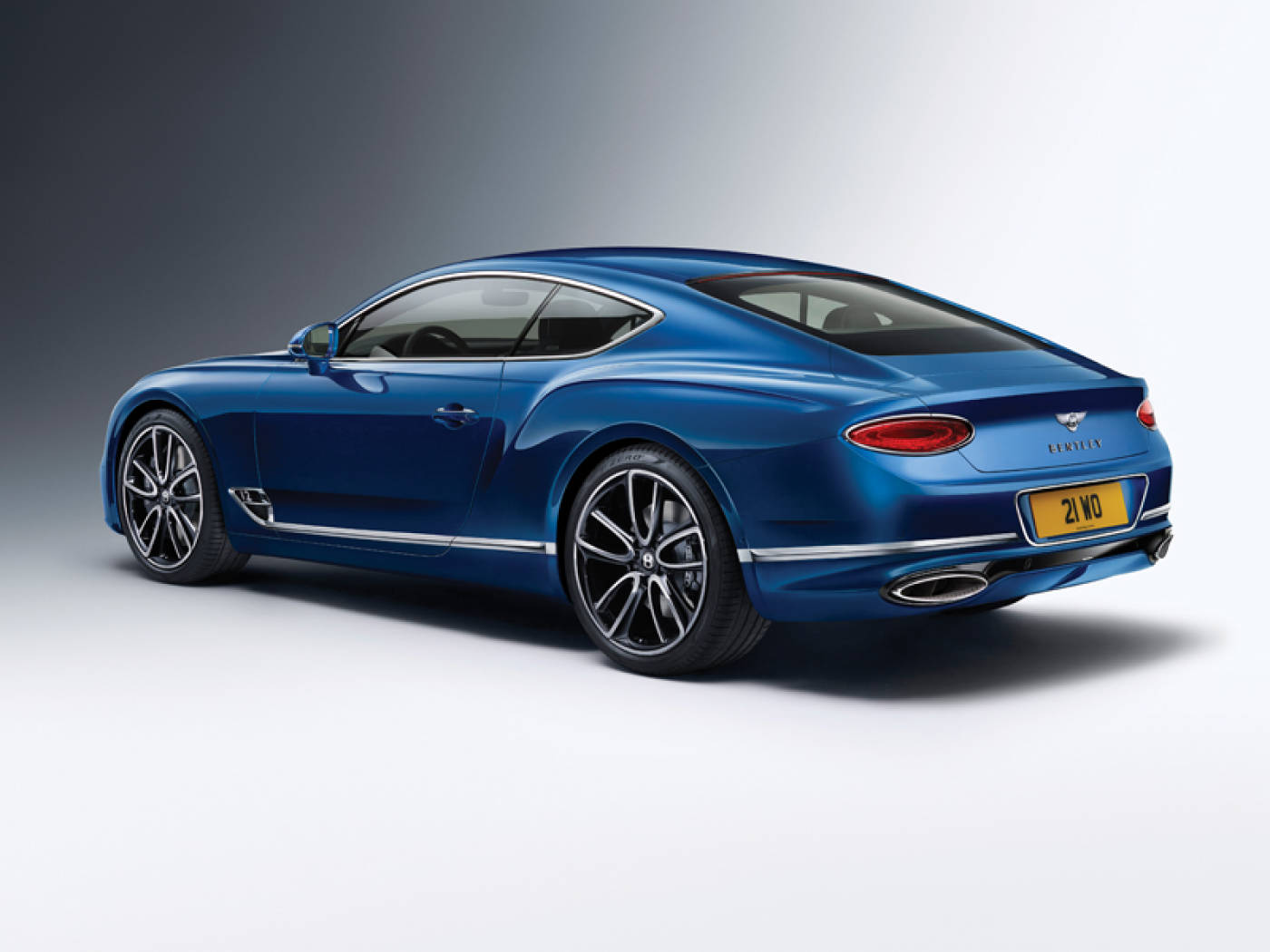 The Continental GT’s profile is longer and lower due in part to the positioning of the front wheels 135 mm further forward, which in turn allows the bonnet to be extended and the nose to be lowered. The rear of the car is a more radical styling departure, with the taillights now shaped into ellipses, reflecting the silhouette of the exhaust tail pipes below them.

While not a light car by any means at 2244kg, it has lost 80kg for even better performance and handling. At its heart sits an all-new 6.0‑litre, twin-turbocharged W12 petrol engine, mated, for the first time, to a dual-clutch eight-speed transmission, for faster, more efficient gear changes.The new powertrain produces 635 PS and 900 Nm of torque, and accelerates the new Conti to the benchmark 62 mph in just 3.7 seconds and on to a top speed of 207 mph, or just shy or three times the UK legal limit!

The interior design of the Continental GT integrates onboard technology with the finest handcrafted natural materials. The result is an exquisite, harmonised, connected and luxurious space. 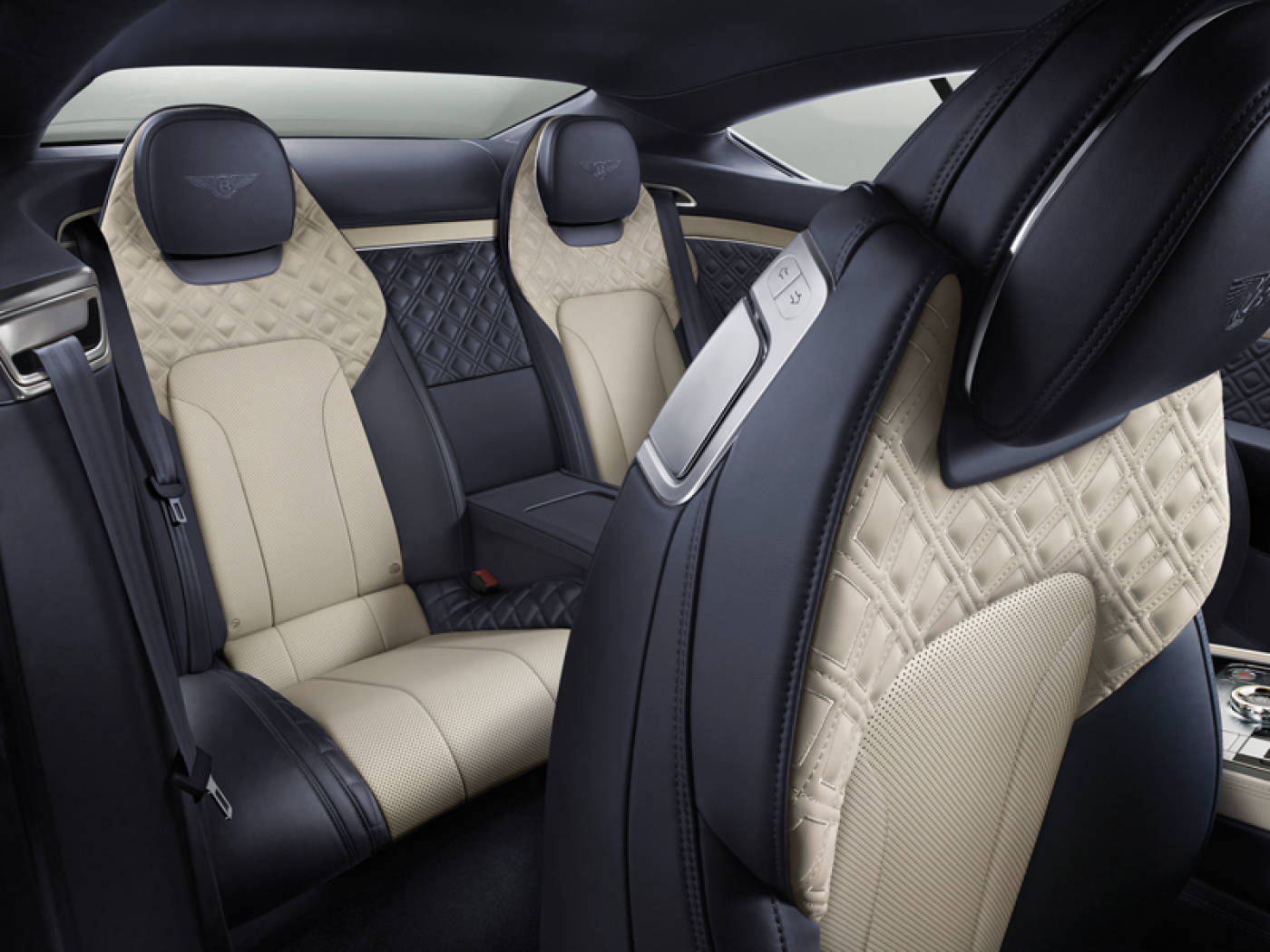 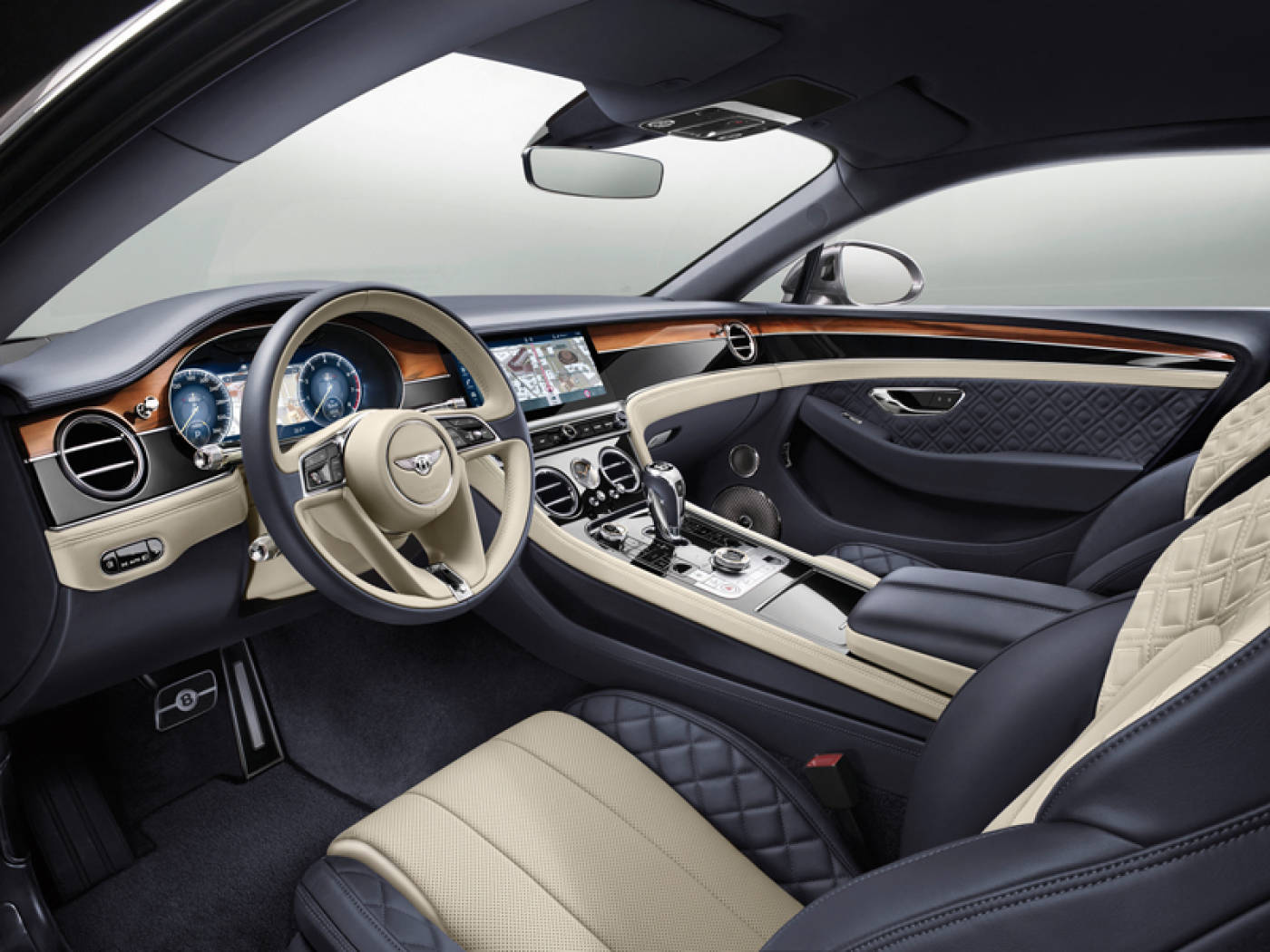 Offering four seats and improved luggage capacity for genuine real-world usability, the luxurious cabin is packed with exquisite details. A fully digital, instrument panel and Bentley Rotating Display for the driver are among the most eye-catching innovations. The rotating display features a 12.3” touchscreen housed in a three-sided unit, which revolves the veneer to reveal a touchscreen or three elegant analogue dials.

The car features the latest LED Matrix lighting technology as standard. The design of the head lamps has been inspired by cut-crystal glasses – the internal surfaces are transparent with sharply defined edges that catch the light like a diamond. The tail lights also feature the cut-crystal effect.

There is a choice of three audio systems. The standard system features 10 speakers and 650 Watts, a Bang &Olufsen 1,500 W, 16-speaker system has illuminated speaker grilles, while the top Naim 2,200 W option comes with 18-speakers and has Active Bass Transducers built into the front seats and eight sound modes.

The interior showcases Bentley’s unrivalled expertise in the authentic use of materials, from the highest-quality natural leathers, to rare veneers.The new Continental GT also redefines personalisation and bespoke luxury. Paint, leather, veneer and lifestyle options are virtually unlimited and tailored to the individual.The standard palette comprises 17 exterior paint colours, with up to 70 in the extended range. There are also 15 luxurious carpet options, eight different handcrafted veneers and 15 choices of interior trim hide.

Fingers crossed there won’t be a diesel Continental with the triple-charged V8 4‑litre engine seen in the Bentayga, but there is every reason to expect a V8 4‑litre petrol engine will find its way into production in future years. While that car will sit lower in the range and may have slightly diminished performance, it could be the purist’s favourite thanks to lower weight and improved handling dynamics. It will also be a little less expensive, but then your average Continental buyer isn’t really looking to scrimp and save. If you do need to ask, the new Continental GT starts from £150,000, although it won’t be hard to spend over £200,000 after perusing the extensive and opulent options list.