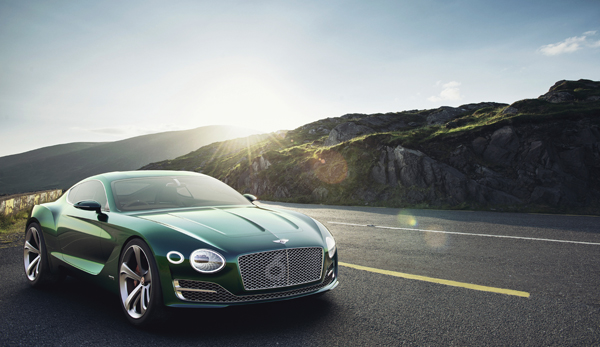 The concept is a British interpretation of a high performance two seater sportscar. From the racing success of the company’s early years to the international motorsport success of today, ​‘speed’ is part of Bentley’s DNA. This inspiration is expressed throughout the EXP 10 Speed 6, where iconic Bentley design cues are fused with progressive craftsmanship techniques and modern technologies.

“Making its global debut at the Geneva Show, the EXP 10 Speed 6 is the ultimate expression of our vision for Bentley’s future – a powerful, exquisite and individual concept. This one car showcases modern automotive design, highly skilled British handcrafting, the finest materials and advanced performance technology. This is not just a new sports car concept – but the potential Bentley of sports cars – a bold vision for a brand with a bold future,” comments Wolfgang Dürheimer, Chairman and Chief Executive of Bentley Motors.

Bentley also unveils a suite of new luxury design upgrades and features to its Continental family of grand tourers in Geneva.

The Bentley Continental GT is refreshed with a complement of new exterior design features, aimed at sharpening the on-road presence of the iconic Grand Tourer. A new front bumper combines with a smaller radiator shell and new, more pronounced fenders to lend a more assertive and confident stance to the front of the car. Enhancing the GT’s iconic silhouette further, three new paint colours are available.

The upgrades continue inside the luxury cabin of the Continental range with a new and contemporary interior including new seat patterns, brightware elements, driver instruments, steering wheel and gear paddles. New material options and hide colours complete the refresh. Onboard WiFi, providing connectivity to all handheld devices in the car is also now available across the Continental family.

Bentley’s four-door luxury sedan, the Flying Spur was on display at Geneva and showcases additional features for 2015, offering even more bespoke choice.

The exquisite cabin of the Flying Spur gains modern and tactile new features to maintain Bentley’s reputation for interior style and usability. Complementing the feature upgrades are new paint colours in the hues of Marlin, Camel and Jetstream – as per the Continental GT – and the addition of Shortbread and Camel hides to the extensive range of leathers.
The newly launched Mulsanne Speed completes the line-up at Geneva. Tailored for the driver, the Mulsanne Speed delivers the fastest ultra-luxury driving experience in the world.

Bentley’s mighty 63/4‑litre twin-turbo V8 engine propels the Mulsanne Speed to 60 mph in 4.8 seconds (0−100 km/h in 4.9 seconds) and on to a top speed of 190 mph (305 km/h), whilst contemporary exterior and interior styling features define the Mulsanne Speed as a statement in quintessential British luxury.