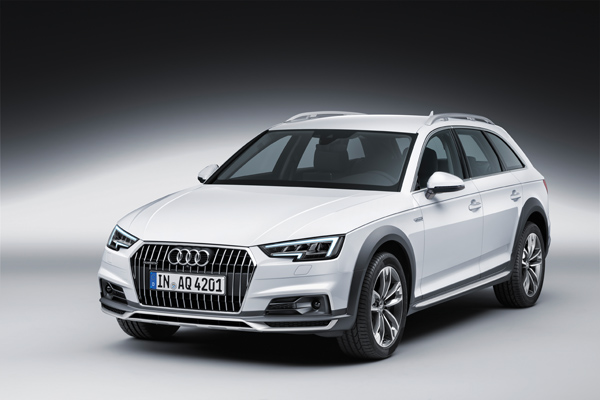 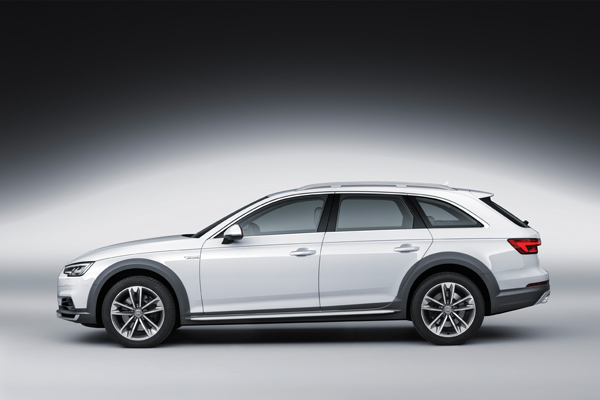 Perfect companion in any situation

The new Audi A4 Allroad Quattro

The new Audi A4 allroad Quattro embodies a unique concept. It combines a high level of driving comfort with off-road qualities, which positions it uniquely within its segment. Thanks to the standard quattro drive and increased ground clearance, the car is also easy to drive where the paved road ends. 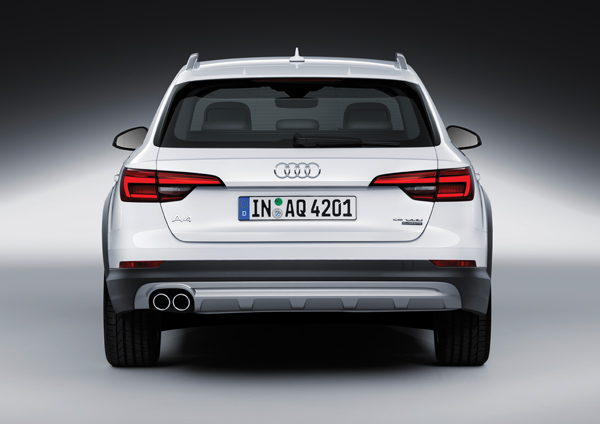 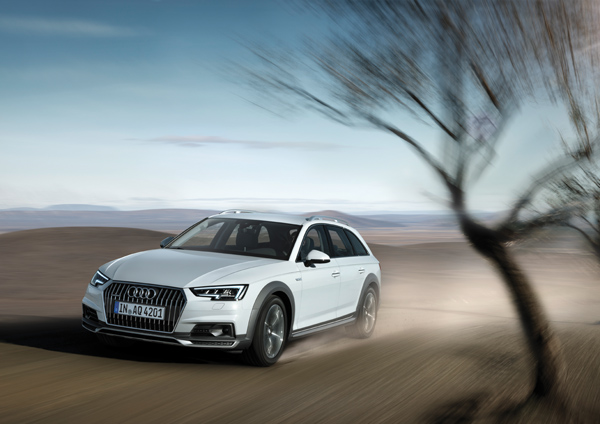 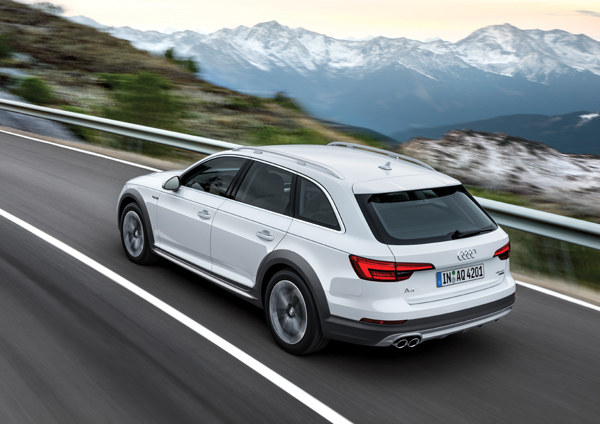 The new Audi A4 allroad quattro is defined by a truly unique look. Above all, the powerfully flared wheel arches and rear bumper attract attention. They are designed in either textured gray matt or in the exterior color. The sturdy underbody protection and rear diffuser are finished in selenite silver. The distinctive sporty front end with its jagged headlights, independent bumper and model-specific air inlets underscore its extroverted character. Vertical chrome louvers accentuate the sculpted Singleframe grille. The front fenders and the tailgate sport ​“allroad” logos. The higher roof rails round out the typical ​“allroad” look. 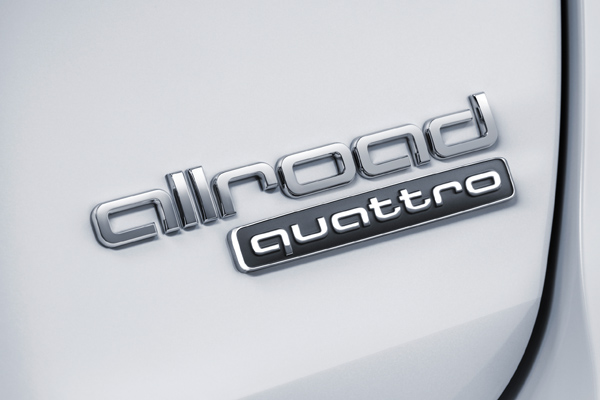 The torque-strong TFSI and TDI engines in the Audi A4 allroad quattro offer improved performance with better efficiency. The TFSI and five TDI engines produce between 110 kW (150 hp) and 200 kW (272 hp), which is up to 20 kW (27 hp) more than in the previous model.

Ride height has been increased to provide an additional 34 millimetres of ground clearance. As an alternative to the standard suspension, Audi is offering the A4 allroad quattro with a suspension system that features damper control for the first time. The driver can use Audi drive select to choose its basic setting at the push of a button in Audi drive select. 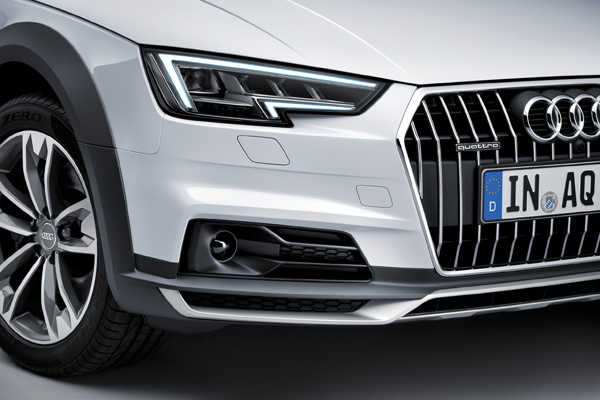 The interior has a spacious feeling, and the numerous high-end infotainment options are very sophisticated. The focal points are the optional Audi virtual cockpit and the new MMI operating concept. The broad and diverse range of Audi connect services, the Audi smartphone interface and the Audi phone box with inductive charger represent the latest generation of online infotainment and smartphone connectivity. With the Bang & Olufsen Sound System, Audi is the first manufacturer to introduce 3D sound with a total of 19 speakers into the mid-sized class.

A characteristic look and more ground clearance are special traits of the new Audi A4 allroad Quattro. The car has a distinctly V‑shaped front end with a unique bumper and model-specific air inlets. Vertical chrome louvers adorn its sculpted Singleframe grille; the sturdy underbody guard and rear diffuser are finished in selenite silver. The powerfully flared wheel arches and the rear bumper are finished in matt structure gray.

At its aerodynamically optimized rear body, the new Audi A4 allroad quattro sports a low-drawn roof edge spoiler with side fins. The exhaust system is either a single- or dual-branch system and terminates either in a dual exhaust tailpipe (TDI) or two separate tailpipes (TFSI), depending on the engine. 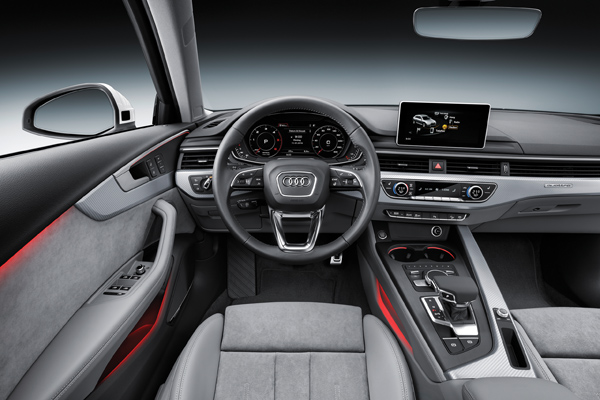 This is the first time that the eight-speed tiptronic is available in the A4 allroad quattro. It is reserved for the 3.0 TDI with 200 kW (272 hp). The gentle, fast and spontaneously shifting torque-converter automatic with its many gear levels makes it possible to operate the engine at its ideal load point much of the time.

For a sportier look, the three-spoke leather steering wheel is available with a flattened bottom and multifunction plus. In models with an automatic transmission, the steering wheels have shift paddles.

The focal points of the cockpit are the new MMI operating concept with a rotary/push-button control including MMI touch, the MMI display that is up to 8.3 inches in size and the optional all-digital, 12.3‑inch Audi virtual cockpit. 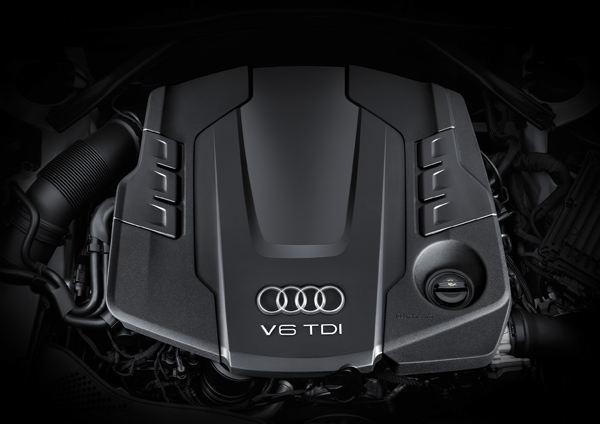 Another new technical highlight in the Audi A4 allroad quattro is the MMI system, especially in the full version as MMI navigation plus with MMI touch. The menu structure, which has been redesigned from the ground up, is based on that of today’s smartphones. An intelligent logic, which enables quick operation, replaces static menu trees, and frequently used functions can be accessed with just a few clicks.

Compared with the previous model, the list of standard equipment is even more generous. It includes xenon headlights, a start-stop button for keyless engine starting, the Audi drive select handling system (from 140 kW), a Bluetooth interface and a 7‑inch MMI color display. The
new Audi A4 allroad quattro is coming to dealerships in summer 2016 with prices
beginning at around £36,000.