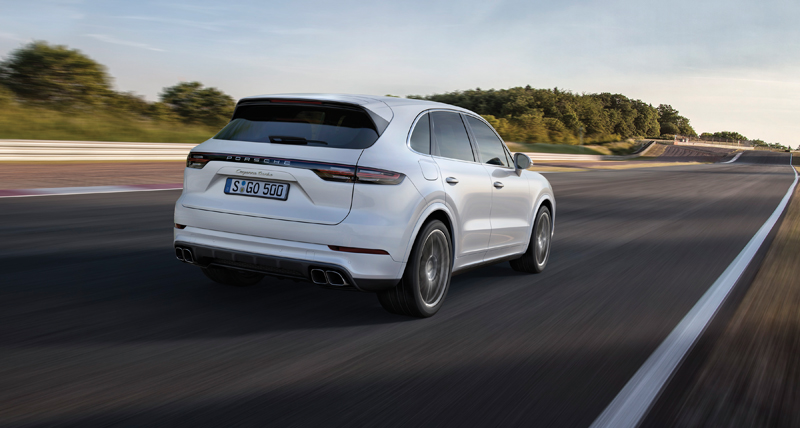 Porsche purists were horrified when the sports car company launched the first Cayenne SUV back in 2002. The car went on to be such a massive success that it has made the company what it is today. Since then of course the SUV has become the default car model of both mainstream and luxury auto makers. You can now buy Jaguar, Bentley and Maserati SUVs while Rolls Royce and Lamborghini also have models waiting in the wings. 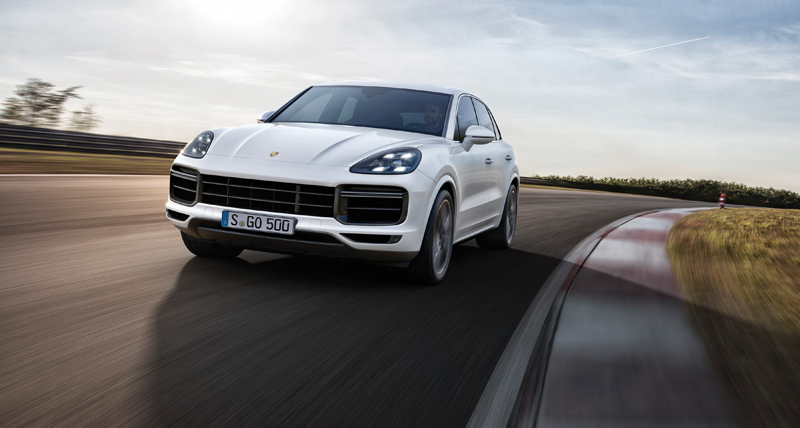 2018 heralds the top of the range Turbo version of the third generation Porsche Cayenne with a mighty twin-turbo-charged 4.0‑litre V8 engine putting out no less than 558 PS. Tick the Sport Chrono Package on the lengthy options list and this hefty motor accelerates from zero to 62 mph in under four seconds (3.9 to be precise). Back in 2002 that would have been supercar performance and it’s still outlandishly fast today. 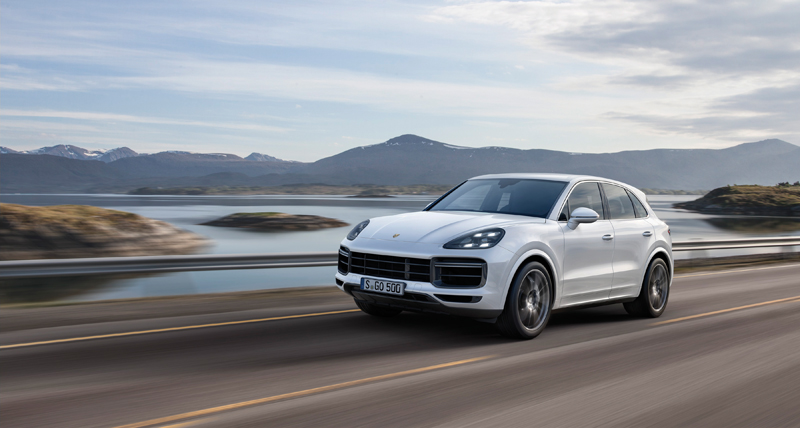 Make no mistake though, the Porsche Cayenne is not a sports car even in Turbo guise. Nor given its four-wheel drive set-up can it really be understood as an off-road vehicle. You can drive it off road, but in honesty few owners are ever going to do so. The limiting factor when you do are the factory-fit tyres and wheels, which are designed primarily for excellent on-road handing and performance.

From the outside the new Cayenne does not look very different from the outgoing model. A distinctive red light strip runs all the way across the rear, joining the two rear light clusters. The distinctive twenty-one inch diameter Turbo wheels are reserved for this top model, and sit inside widened wheel arches edged with painted wheel arch trims. The door trims and rear apron are painted in body colour. The twin exhaust tailpipes are also a distinguishing feature unique to the Turbo model. 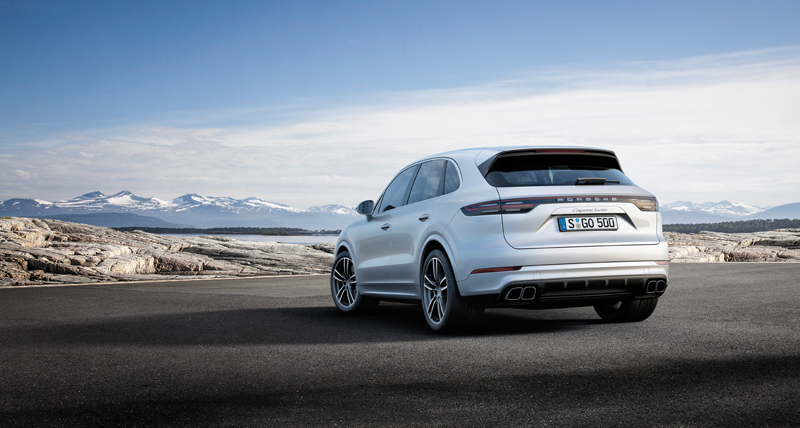 The new Cayenne Turbo is also the first SUV to have an adaptive roof spoiler as a part of its active aerodynamics. Depending on the position, this optimises efficiency, increases downforce on the rear axle and, in the airbrake position, shortens the stopping distance from higher speeds. At full braking from 155 mph, the Cayenne can come to a stop up to two metres earlier as a result.

The biggest differences in the new model are in the all-new interior, where the quality of build and materials feels reassuringly expensive. Porsche has at last done away with its one button: one function policy that made the previous model a slightly bewildering flight deck on first acquaintance. Virtually all the vehicle functions of the fully networked car can now be displayed and operated using the high-resolution touchscreen display of the Porsche Advanced Cockpit. Porsche has stuck with the central rev counter in front of the driver though, just so you know this is a true driver’s car. 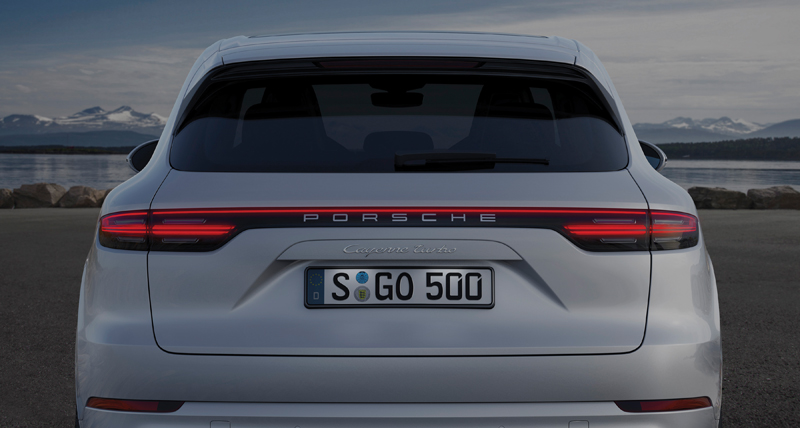 The laws of physics dictate that a high sided SUV simply can’t hold the road like a true sports car. The Cayenne Turbo’s three-chamber air suspension with the Porsche Active Suspension Management (PASM), rear-axle steering and automatic body roll stabilisation via a 48-volt electrical system, do however give the car dynamic driving characteristics you would not believe were achievable in a 2.2 tonne SUV.

Three air chambers per spring strut are used in the adaptive air suspension design, making the chassis able to map different spring rates. With six selectable height levels, the ground clearance can be manually adjusted to suit the off-road terrain. They are also actively controlled via five new driving programmes for road journeys and, in theory, off-road exploration. With optional rear-axle steering, the electric Porsche Dynamic Chassis Control (PDCC) roll stabilisation connected to a 48-volt vehicle electrical system and Porsche Torque Vectoring Plus (PTV+), the new Cayenne Turbo does flatten out twists and turns in a way that seems scarcely possible. At the same time, its everyday suitability in terms of parking and turning manoeuvres, and overall comfort, is also improved. Using a concept borrowed from its sports car models, the Cayenne Turbo has mixed tyres (with standard 285⁄40 tyres on the front axle and 315⁄35 on the rear) for even better longitudinal and lateral grip. It rides smoothly in town on the motorway and handles twisty mountain roads almost like it’s on rails. It’s as close to a sports car as you can get in this type of vehicle. This is a capacious luxury SUV that also offers sports car performance and outstanding handling.

Available to order now, the Cayenne Turbo priced from a whisker under £100,000. First deliveries to your local Porsche Centre will be from April 2018. 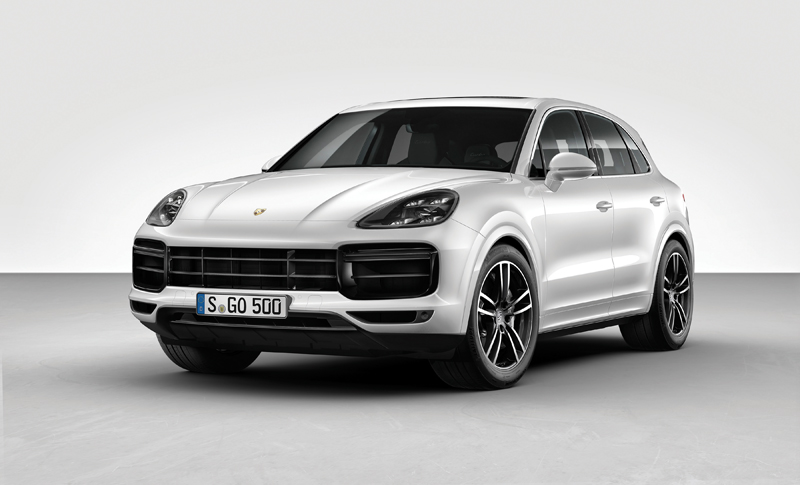