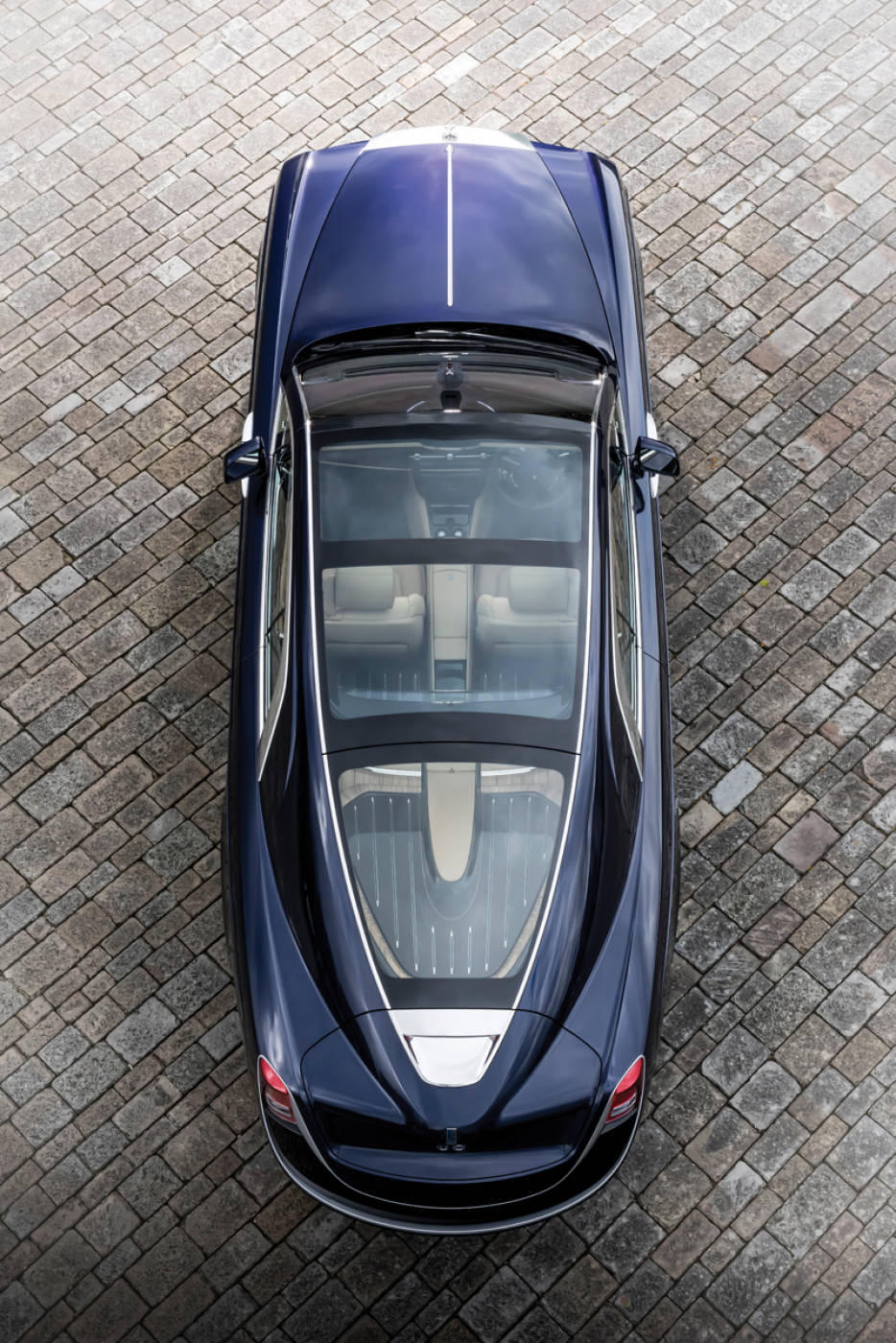 When, approximately one year ago, Rolls-Royce presented 103EX to the world, it invoked its coachbuilding heritage to inspire its future clientele. This Vision Vehicle envisaged a world of completely personal luxury mobility where new technologies would allow every Rolls-Royce to be designed in their owners’ image, should they wish.

The mere idea of a modern coachbuilt Rolls-Royce was not enough for one Rolls-Royce connoisseur however. This individual approached the marque with his own idea of a two-seat Rolls-Royce that he wanted to be created in the here and now. That motor car is here, now and is christened ​‘Sweptail’. In a nod to the swept-tail of certain Rolls-Royces from the 1920s, admired by the client so much, 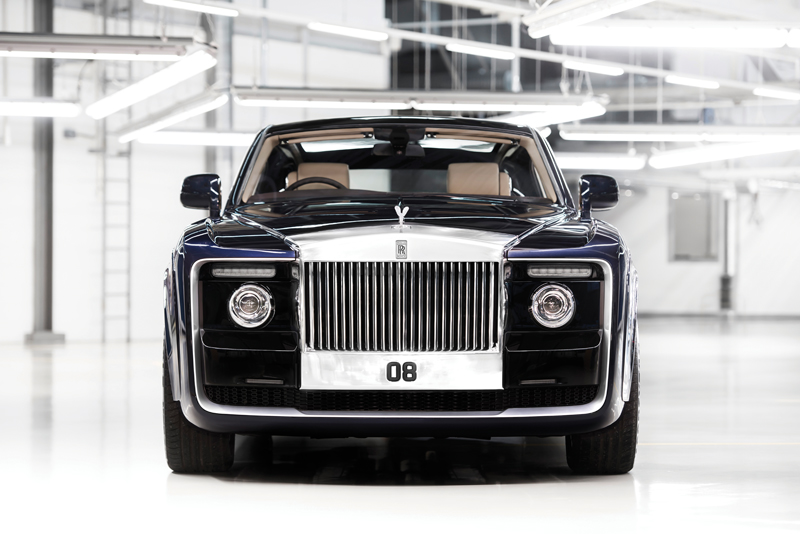 Presenting the car to the media at the Concorsod’Eleganza at Villa d’Este on Saturday 27th May 2017, Torsten Müller-Ötvös, Chief Executive Officer, Rolls-Royce Motor Cars said, ​“Sweptail is a truly magnificent car. It exudes the romance of travel for its own sake, and immediately places ​‘Sweptail’ in the pantheon of the world’s great intercontinental tourers. Rolls-Royce’s history as the world’s leading coachbuilder is at the very core of its identity as the world’s leading luxury brand”.

In 2013, Rolls-Royce was approached by one of its most valued customers with a very particular request. A connoisseur and collector of distinctive, one-off items including super-yachts and private aircraft, this gentleman came to Rolls-Royce to realise his vision of a one-off luxury motor car like no other.The client immediately established a close rapport with the design department led by Taylor, who set about bringing the idea to life. 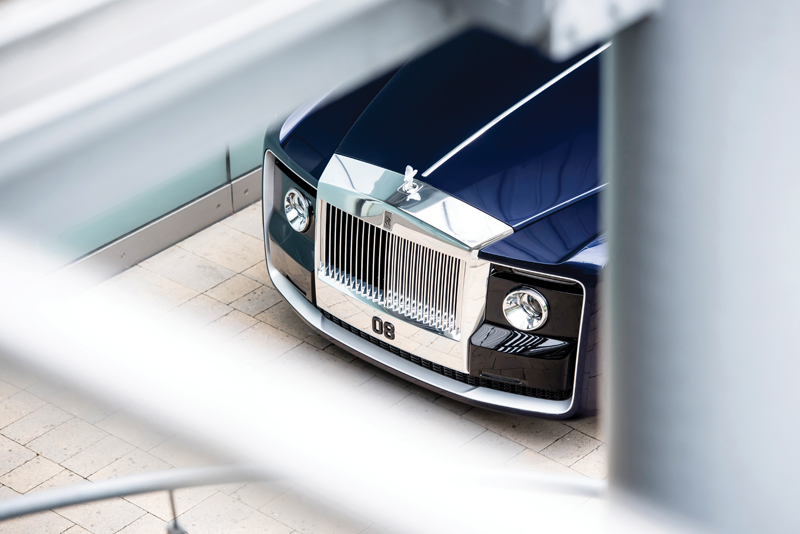 Inspired by the beautiful coach built Rolls-Royces of the 1920s and 1930s, the client’s desire was for a coachbuilt two seater coupé featuring a large panoramic glass roof.

The grandeur, scale, flamboyance and drama of the 1925 Phantom I Round Door built by Jonckheere; the svelte tapering glasshouse, dramatic dash to axle proportion and up-sweep of the rear departure angle of the 1934 Phantom II Streamline Saloon by Park Ward; the elegantly falling waist-rail, swept tail coachwork of the 1934 Gurney Nutting Phantom II Two Door Light Saloon, and the flowing roofline, rising departure angle, and again the swept tail coachwork of the 1934 Park Ward 20⁄25 Limousine Coupé were all considered by today’s Rolls-Royce designers.

Over the course of a number of years, Taylor and his team of designers engaged with the client in a wonderfully intellectual journey as they worked together to realise the customer’s distinct vision and bring it to life. The result of this one-off coachbuild project is the completely unique Rolls-Royce ​‘Sweptail’.

As one moves around to the side of ​‘Sweptail’ one finds that it is the striking silhouette that defines its unique character. Flowing as they do from upright and formal frontal aspect, the lines of ​‘Sweptail’ resolve into a sveltely elegant form. The scale and grandeur of this regal looking coupé is evident.

The coup de gras of the rear is the ultimate homage to the world of racing yachts that inspired the client, with its raked stern. Seen directly from behind, the rear taper contrasts strongly with the front of the motor car, shaping a completely new perception of a dramatic Rolls-Royce Coupé.

The cleanliness of the surface of ​‘Sweptail’ is maintained as the bodywork wraps under the car with no visible boundary to the surfaces, a treatment that is akin to the hull of a yacht.

The highlight feature of ​‘Sweptail’ however is that specifically asked for by the client. An uninterrupted glass roof, one of the largest and most complex ever seen on a motor car of any marquee.The size, scale and complexity of the glass roof’s curvature is a marvel to behold, and from above again accentuates the speed and elegance of ​‘Sweptail’. Creating the ambience of the interior of the motor car, the glass of the roof is framed by polished aluminium rails that channel it into a vanishing point at the rearmost extremity of the cabin.

The provision of only two seats in a motor car of this size exudes the romance of travel for its own sake, and immediately places ​‘Sweptail’ in the pantheon of the world’s great intercontinental tourers. This is furthered by the overall design of the interior, which has been conceived in a classic two-seat GT configuration, echoing the touring nature of its exterior body lines. 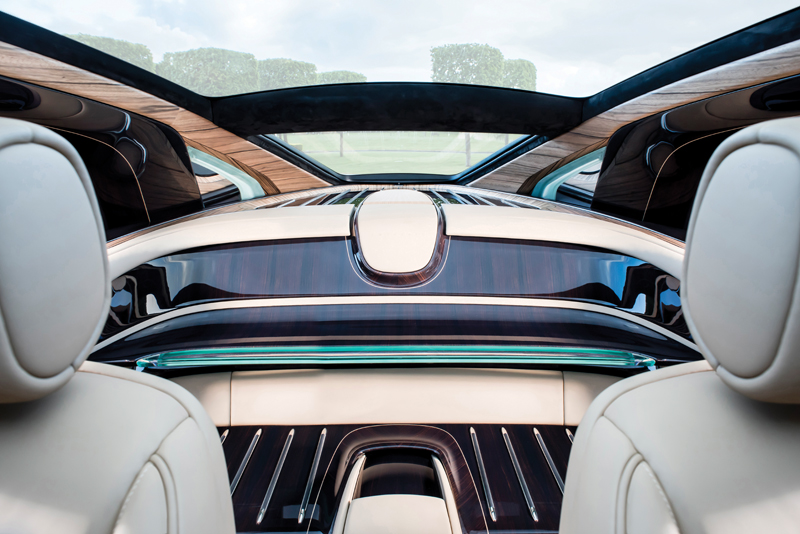 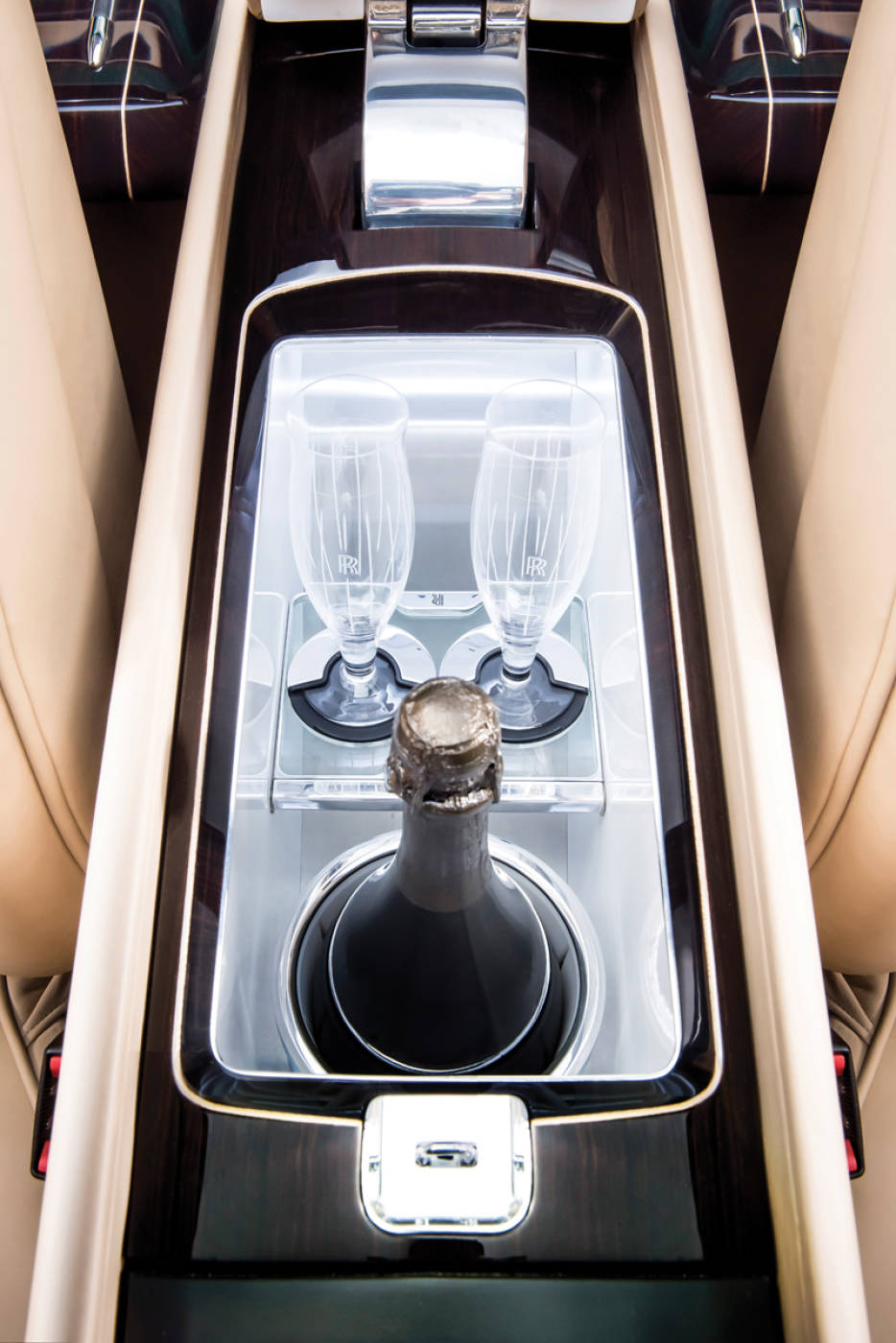 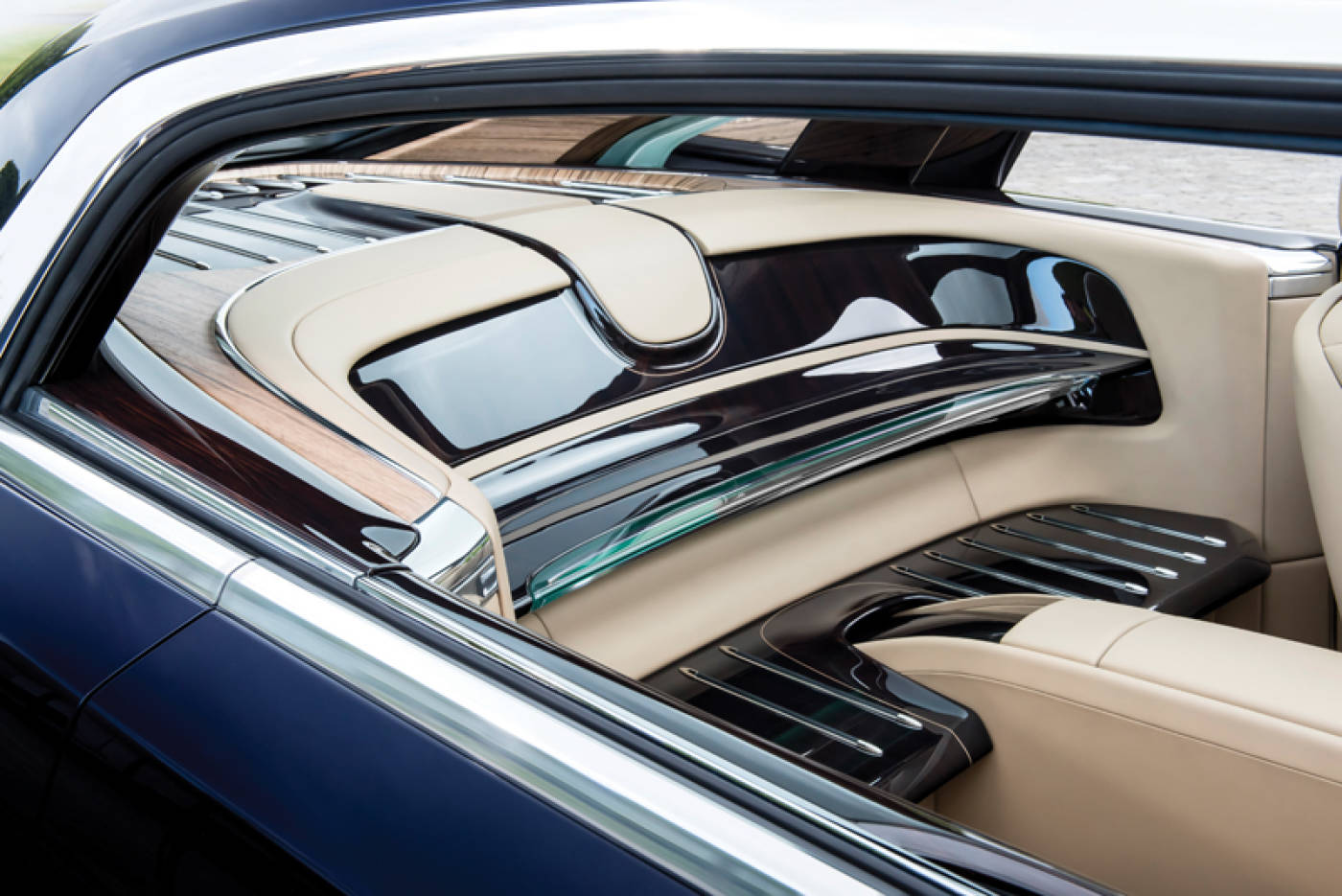 And what a place to be as one watches the world slip by through the vast windows and roof, detached from the outside world in a cocoon of luxury whilst feeling one is part of that passing landscape.

The interior is ruled by a philosophy of simplicity and minimalism leading to a distillation of componentry and a purification of clutter. The value of beautiful materials takes precedence here, resulting in a fastidious suppression of switchgear to the absolute minimum to make way for the richest of materials applied in the most honest of fashions.

Generous quantities of polished Macassar Ebony and open-pore Paldao adorn the interior, creating visual and tactile contrasts for the owner, both classical and contemporary. All their forms however are thoroughly modern as they echo the exterior lines of ​‘Sweptail’, hand-formed to encircle the occupants with some of the most beautiful natural materials in the world.

But it is what those materials have been made to do that is the most fascinating aspect of this one-off cabin. True to the spirit of a transcontinental GT that Rolls-Royce established in the 20s and 30s, in place of the rear seats is a vast expanse of wood creating a mid-shelf with an illuminated glass lip, and a hat shelf which flows to the outer limits of the interior volume.

Other modern materials and modern uses of those materials feature. The Macassar Ebony veneer seen around the cabin has been handcrafted to adorn the dashboard in the most modern fashion.

This is a most personal, coach built Rolls-Royce for a specific customer, every aspect of the material treatment of ​‘Sweptail’ exudes handcrafted quality and exacting attention to detail. In short, it is a Rolls-Royce – but like no other before.

So if you have around £10 million spare change floating around on your console and feel the urge to bespoke to the Sweptail level, make a discreet phone call to your nearest Rolls Royce showroom very soon. 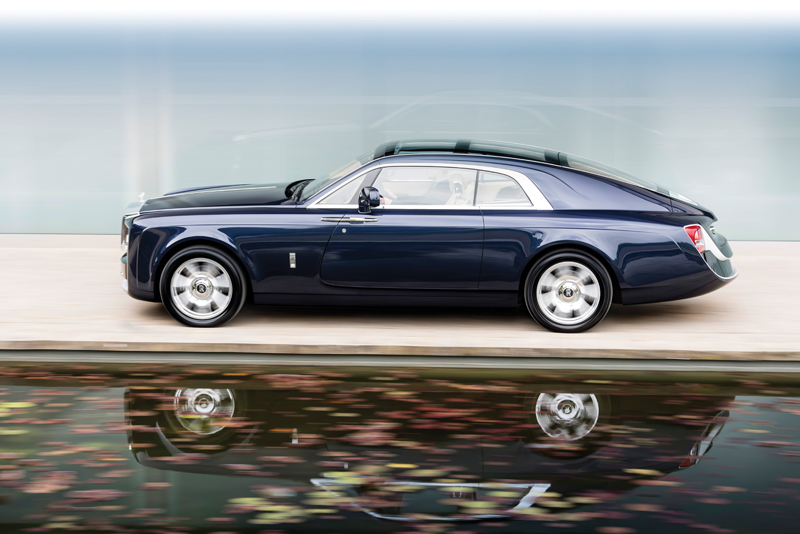