A luxury Champneys country house hotel, once home to Princess Marie of Edinburgh, grand-daughter of Queen Victoria, who later went on to became Queen of Romania. 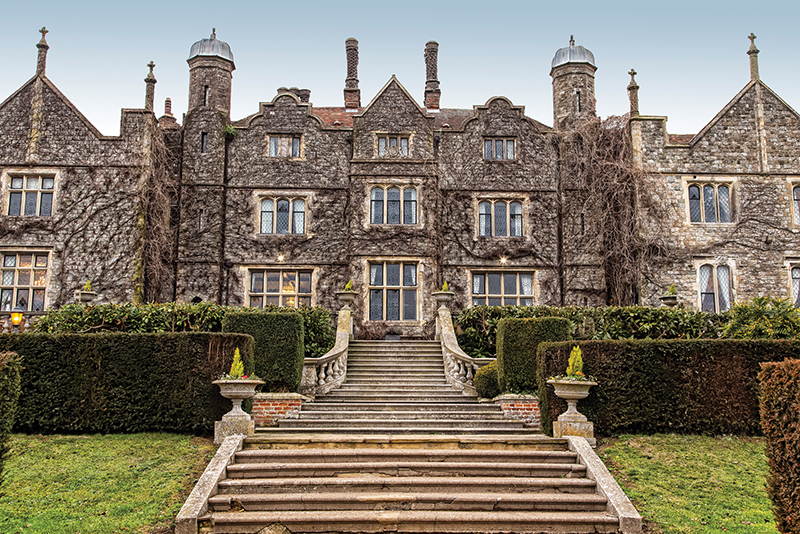 A stone’s throw from Ashford, set at the end of a long tree-lined drive, within the classic gentility of a quiet, 450-year old manicured estate, is Eastwell Manor. Its unique Neo-Elizabethan old-world charm has spanned centuries – and a Manor House you don’t so much look at as bathe in.

The dramatic stone archway which, at one time, admitted horse-drawn carriages, leads to a stone-flagged courtyard. An ancient wooden door which gives access to a magnificent reception hall clad in sumptuous dark wood-panelling and a roaring open wood fire which instantly creates a decadent ambiance.

If you listen closely, you’ll hear the ghosts of Eastwell’s past — the tinkle of fine glassware, the shushing of evening gowns across stone floors and giggles and whispers as secrets shared behind fans. Gilt mirrors tell stories of sumptuous parties and royal guests, whilst glistening crystal chandeliers cast soft intimate light over priceless paintings and exquisite furnishings.

Immediately across from the reception is a luxurious drawing room; to the right is a distinctive and stylish bar where a pianist stokes the ivories of a Baby Grande; and to the left is the prized dining room. All the plush common areas are contained in carved panelled rooms, with massive baronial stone fireplaces, overlooking the pastoral splendour of the estate. 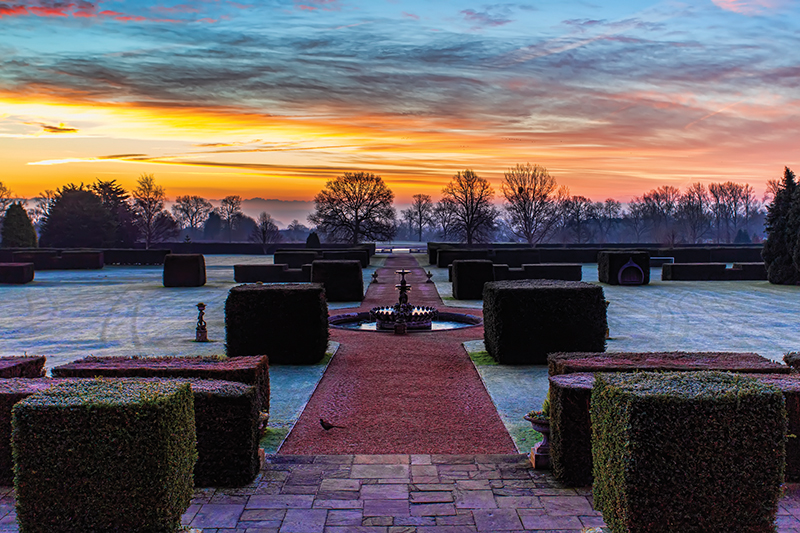 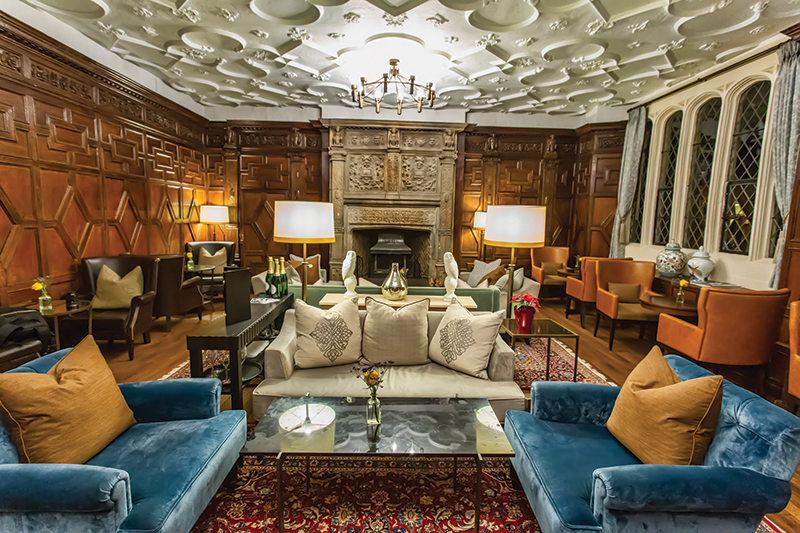 Fascinated by the regions history I asked the doorman if he had any further knowledge of Princess Marie. I was astounded to learn that her immediate lineage extended to the Romanova’s in Russia and Bavarian royalty.

She was to marry her cousin, George of York, the future George V, but instead married Ferdinand of Hohenzollern-Sigmaringen, the heir to the Romanian throne. Twenty-one years later, following the death of King Carol 1st, Ferdinand and Marie became Romania’s monarchs. Soon thereafter Romania entered WW1 as part of the Allied Powers.

Immediately Queen Marie dedicated her energies to charitable work, acting tirelessly as a nurse and setting up her own hospital in the grounds of the Royal Palace in Romania. Here she spent most of her time tending to the needs of seriously wounded soldiers, often taking them flowers, sweets and cigarettes. She also set up relief schemes, managed medical support, attended military and civilian ceremonies and raised money for the wounded, war prisoners and war widows.

The beautiful, witty and intelligent Queen Marie caught the imagination of Romania and of people around the world, inadvertently becoming a role model. She was a pivotal figure at the post-WW1 Paris Peace Conference where her brilliant diplomatic skills and vast array of connections secured a favourable outcome recognising the unification of all Romanian provinces into one democratic state.

Walking through the luxurious common areas, and along the corridors which lead to the guest rooms, there are oil paintings, sketches and sepia-toned photographs of stiffly posing royals. It’s evident Queen Victoria was a frequent visitor as there are photographs of her interspersed throughout the grand old building; as well as those of Edward VII.

Transporting my luggage up a flight of ancient stairs, my knowledgeable doorman speaks of Eastwell Manor in the time of Edward the Confessor, King Harold and the Battle of Hastings.

Delivered to the cavernous George Broderick room, which overlooks the immense and neatly trimmed garden, I’m left to settle in. The room itself is grand in scale and pristine in condition, with all the required mod-cons and elegant touches. Décor-wise it’s understated and stylish. I play with my espresso machine and produce a coffee which I take to the window. It’s simply astounding to think Queen Marie of Romania, grand-daughter of Queen Victoria, possibly looked through this very window, perhaps slept in this actual room and walked the corridors I stomped down.

At dinner, seated at a tall leaded window in the Manor Restaurant, overlooking the serene gardens, I watch a couple of peacocks having a spat. Inside, Nat King Cole croons softly in a room festooned with dark beams, crystal chandeliers and tables dressed in starched white linens. The award-wining menu, influenced by the Kentish countryside, understates the skilled Salvador Dali-like dishes which transforms local produce to artistry on a plate – pea and watercress velouté with a quail’s egg, savoury granola and minted cream; seared scallops and roasted pork belly with butternut purée, pickled seaweed, crackling and a red wine jus; pan fried stone bass with black caviar – and don’t get me started on the desserts!

Eastwell Manor may well be dripping with royal history and have many stories worth telling, but its dining room is, in itself, an event, an occasion even, one that Queen Marie would definitely indulge.

Eastwell Manor, a Champneys Hotel & Spa, is AA 4 Red Star rated; and the Manor Restaurant has two AA Rosettes for culinary excellence. There are 23 rooms, all individually decorated, many with four-poster beds, with rates starting at £110 per room. 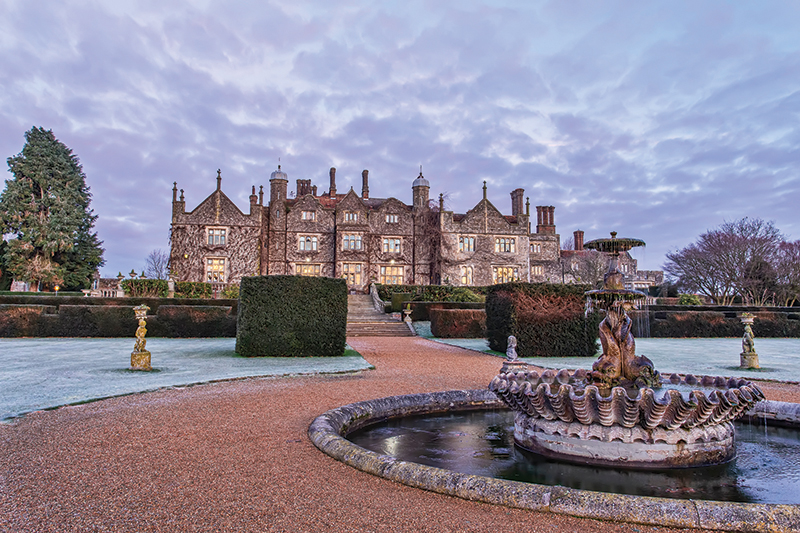