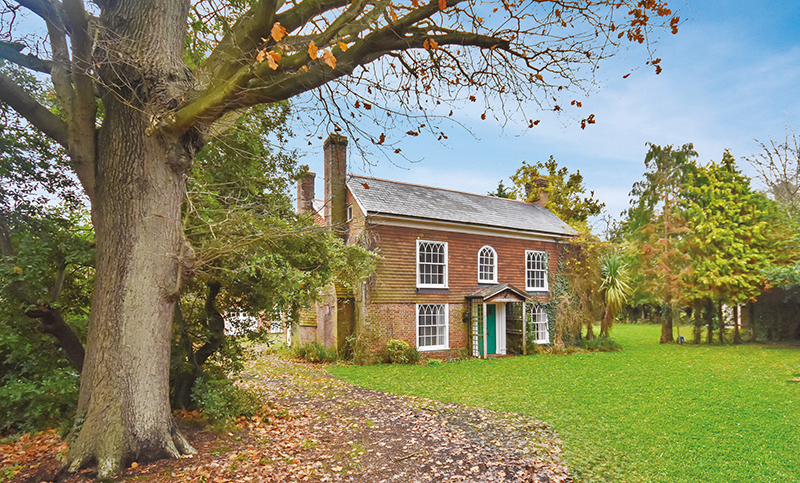 This very attractive detached Grade II listed home has four bedrooms, two bathrooms and three reception rooms. It is in the village of Northiam which lies in the High Weald on the Kent-Sussex border adjacent to the Domesday village of Newenden. At the time of Domesday in the late 11th Century the area was owned by the then Archbishop of Canterbury before passing into the ownership of Battle Abbey. During the 16th century the puritan John Frewen made Northiam his home when he became rector of the parish in 1589. His son Accepted Frewen went on to become canon of Canterbury Cathedral and the Archbishop of York. The Frewen family still reside in Northiam.

Northiam is well provisioned with small businesses and services including doctors, dentists, vets, optician, primary & nursery schools, two general stores. Sitting in gardens and grounds of approximately one acre the property also enjoys a paddock of five acres and various outbuildings; along with planning permission for a separate three bedroom detached house.

Inside there is an entrance hall, two reception rooms, drawing room, dining room and a kitchen / breakfast room opening to a family room. There is a stunning drawing room with curved sash windows and a well appointed kitchen. There is also a cellar, a split level first floor landing, two double bedrooms, the master bedroom with en-suite shower room, a double bedroom and a family bath and shower room. In the grounds sits a detached two bedroom Coach house. This is ideally suited as annexe accommodation or holiday let.

The gardens and grounds are in 1 acre with the addition of a paddock of five acres. There is a plot with planning permission to build a detached three bedroom house. There is a large parking area to the front of the house with good sized gardens, predominantly to the side of the house with several substantial timber outbuildings with hedged and fenced boundaries to the front and side. To the rear of the main house is a large courtyard giving access to the detached Coach House, which enjoys a private terrace to the rear.

This enchanting Sussex lodge oozes character and charm in abundance and ticks all the boxes for those searching for quiet country living.