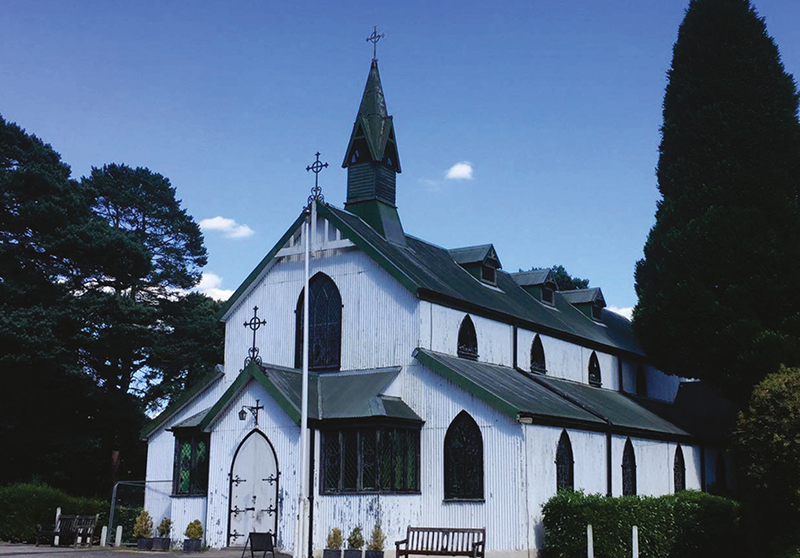 Tabernacle. Now there’s a much underused word Meaning a temporary or portable earthly dwelling for a place of God or in a simple form a holy prefab!!

The Garrison Church of St Barbara’s in Deepcut was constructed in 1901 as a make- shift place of worship for a pair of infantry regiments stationed at the new barracks at Blackdown and Deepcut. The acre of land surrounding the church was gifted by the Crown in 1905 and then became consecrated ready to be used for burials and contains the graves of many deceased war heroes.

Structurally the church has been constructed in a very simple form, steel corrugated iron sheets on the walls and on the roof all laid onto a simple timber frame with a tall thin spire (flèche) to the front section and doors to the front and rear.

The exterior has been painted so many times over the years allowing the paint to thicken up leaving a lovely patination which is very endearing indeed
Internally the structure is timber and shows a simple almost industrial roof construction with five bays with a pair of windows in each. Centrally above in the roof there are dormers and despite its age and the fact it was not to be permanent structure it all looks very well kept and structurally very good.

The architect is of dubious antecedence, possible by a company called Humphreys ( late C18th company that made temporary buildings) and St Barbara’s has been granted Grade II status due to it being a rare example of a building that was not intended for a long life.
There is another reason for its listing and this is the best part! St Barbara’s over the years has been gifted a vast, dramatic and colourful collection of artifacts and relics from the many conflicts that the regiments connected with the church have been involved in during the 115 years that it has been active this includes logs and journals for each vent including the weather report.

The advent of the Second World War was marked in the service book with ​“No collections War declared 11am”. This event triggered a rush to get married and there were no fewer than 12 weddings in the following two weeks.

Flags from the D‑Day landings at Juno beach, American and Canadian military flags are standing side by side with so many commemorative pieces of military exhibits. There is even a Corps flag from the Falklands conflict complete with bullet holes from an Argentinian aircraft attack. (Albeit the holes have been repaired).

Until next time… Love Old Buildings.