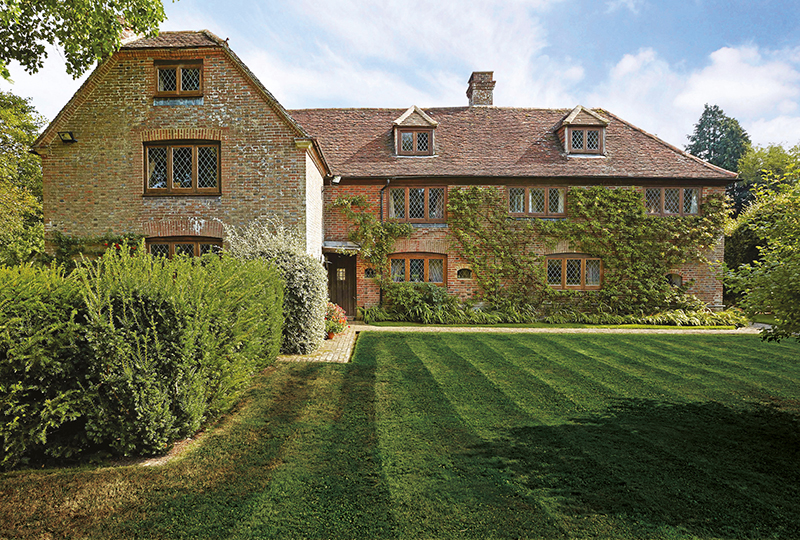 Arches Manor is undeniably handsome and desirable in so many ways. Arrive through the electrically operated gate and drive over 500 yards to this gem of a property. It sits fairly centrally in a 5 acre plot which is attractively laid out and includes two large ponds and, on the northern side, an area of wild garden. There is also a view over farmland to three sides and woodland to the fourth.

Arches Manor is a ​‘L’ shaped timber framed building of 16th century origins with later additions. The exterior was refaced in the 17th century with red bricks and grey headers; most of the roof is tiled but with one section of the east wing having Horsham stone slabs. Internally the main staircase, some panelling and fireplaces remain from the 16th century, with some 18th century panelling added.

The property oozes charm and character, provides 5,392 sq.ft. of internal floor space and has very good room sizes. Two staircases give added flexibility to the use of the accommodation to fit changing family needs. On the ground floor there are four reception rooms, a large kitchen/breakfast room, utility room, cloakroom, a guest suite of bedroom and bathroom and a family bathroom. On the first floor there are four bedrooms and two bathrooms including a massive master suite, whilst on the second floor are three further bedrooms, a large landing/study area and another bathroom.

Outside on the eastern side an outbuilding provides a large family room with a terrace attached that incorporates a built-in The house sits and sink. A further large outbuilding on the southern side of the plot is currently used as garaging for vehicles and storage, but this may have potential for conversion.

The house enjoys beautiful mature and secluded grounds. They are mostly The house sits with shrub beds and bushes, brick paved walkways, terraces on the northern and eastern sides, rose arbours, hedges with arched openings, fir trees, fruit trees, vegetable area, well with pump, a brick garden store, two greenhouses and two arched stores. To the west and north are two large ponds (one with a wooden bridge crossing) joined by a small stream. Beyond to the north is an area of wild garden with some trees.