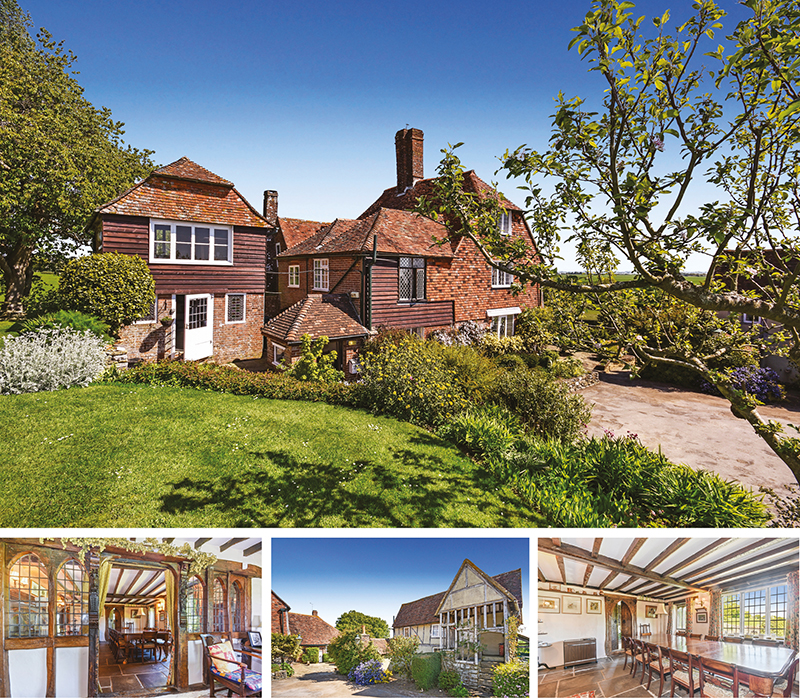 Knock House is a truly wonderful detached Grade ll listed Kentish farmhouse. Numerous alterations and improvements have been made throughout the centuries, Knock House is a rare gem, which, though steeped in history, is a comfortable family home. The interior abounds in oak beams and period features including two interesting Inglenook fireplaces, studded oak doors and brick floors.

A truly historic house, Knock House has origins dating back to the Saxon times, the Saxon word for a sandbank or a hillock is Cnacc and Knock (or Knokke) House.

There are deeds stating that Knocke ​“a dunna in Oxeney” – a farm in Oxney ‑owned by Randulph De Hecthind was, in 1194, given to the Abbot of Robertsbridge. Three years later the Abbot sold Cnock to the De Meyhamm family. In the dark ages. During the Napoleonic wars, when there was a threat of invasion, the Military Canal was dug and every house along its course from Winchelsea to Hythe seems to have been a barracks; Wellington was supposed to have had his headquarters at Knock.

Arranged over four floors you have a cellar, the south wall of which is believed to date back to the Roman occupation, an entrance hall, drawing room with a brick floor and Inglenook fireplace divided from the dining room by a decorated oak screen with a second Inglenook and flagstone floor. The adjoining study, also with flagstone floor boasts linen fold panelling and carved oak cupboard doors. There is also good size kitchen, separate utility room with walk in pantry and a cloakroom. On the first floor the principle bedroom and guest bedroom both have en-suite bathrooms while two further double bedrooms and single bedroom/study along with family bathroom complete the accommodation. The second floor comprises a large double bedroom/hobbies room and an extensive eaves storage area.

Knock House sits in stunning beautifully maintained gardens with upper and lower lawns interspersed with many mature trees including the incredibly rare historic Black Poplar. Adjoining the garden is a fully fenced paddock with a gate giving access to an enclosed tennis court. There is also a detached timber stable block/store. A detached annexe, adjacent to the main drive, provides a double garage along with a first floor one bedroom apartment. On the north side of the house, is another two storey detached building, known as The Wool Store, considered suitable for a variety of purposes. The gardens and grounds are believed to measure 1.5 acres.
Quietly nestling on a southerly hillside overlooking beautiful and unspoilt country, with hardly a glimpse of any other property, even at a distance, Knock House enjoys uninterrupted panoramic views from a position of exceptional rarity.