1824 was a great year for the advancement of society, The RSPCA was established and the first fire brigade was founded in Scotland….And Joseph Aspdin patented Portland cement!!!

Before you say ​“here he goes again knocking cement” it has its place in the construction industry, it sets fast, easy to form into unusual shapes and is very cheap. Any building over four floors is a great deal stronger in cement and without it advancements in modern construction would be so less advanced and we would have been denied large span bridges, skyscrapers and the rest! 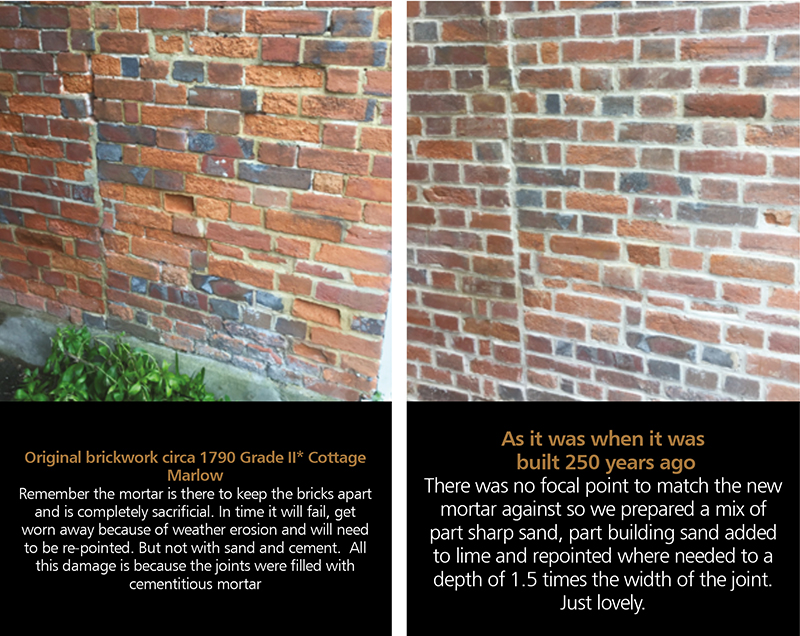 But we should have drawn a line in the sand around 1920 when the introduction of the cavity wall came into place, house construction changed overnight. Lime based buildings were deemed to expensive, time consuming and outdated. The new world wanted change and lime was discarded like an unwanted Christmas toy under the bed.
So parliament should have decreed a new law. Stating that as from 1st Jan 1921 anyone using cement on a building constructed before that date should be strung up by their cement buckets and banned from using a trowel ever again.

Because this is what happens…
These bricks repointed with cement around 1970 and have been so badly affected by erosion that very many of them were unsalvageable. The hardened face surface had been frost damaged because the rain that soaked in was not allowed to drain down and therefore froze, destroying the surface and fabric of the brick.

The bricks removed some of which were reused as what we do is turn them around and use the other face which has laid inside the middle of the wall since it was built
I am not moaning, Love Old Buildings keeps very busy by repairing damage done by others a long time ago, and we really love bringing something back to the condition it was in when it was first built. Just don’t want cement introduced into the fabric of old buildings.

It is just an ongoing tutorial that organisations like SPAB, IHBC, Listed Property Owners Club and Love Old Buildings keep on teaching, so if you can spread the word please…

Until next time… Love Old Buildings.