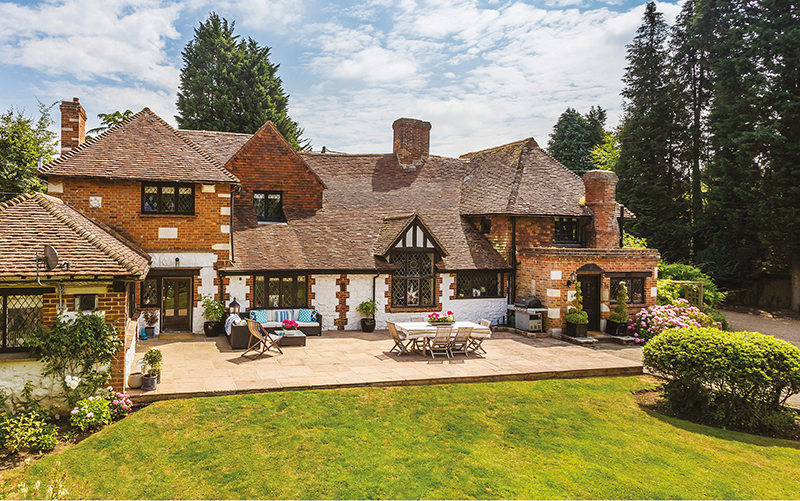 Once the home of actor Richard Hearne, also known as ​‘Mr Pastry’, Platt Farm is a marvellous, historical six bedroom Grade II Listed house that oozes character. With origins dating back to the sixteenth century, the house has been added to over the centuries and is now around three thousand, five hundred square feet, over two floors together with a cellar.

Displaying many architectural features, you will find a wealth of fine exposed oak framing including a King Post in the master bedroom, a mixture of timber, parquet and tiled floors, painted exposed brick and stone walls, leaded light windows with a mixture of diamond and square casements – some with hand coloured inserts and fire places of various styles.

The house has a warm and welcoming atmosphere and indeed proved very popular with the famous friends of ​‘Mr Pastry’ such as Buster Keaton and David Niven, who often came to spend time here. The library has a vaulted ceiling, a curved oak staircase and an intriguing fitted bar area. The elegant drawing room is off to one side and has a feature fireplace incorporating a bread oven and exposed beams. Elsewhere the dining room is within a Victorian addition to the house and so has parquet flooring and half-panelled walls. Steps up lead to the kitchen/breakfast room, which is furnished with, pine wall and floor cabinets and a gas four oven Aga, supplemented by a two-ring hob and an integrated fan oven. The rear hall has a shower room and a second staircase to the first floor as well as the Family Room. Bedrooms are laid out over the first floor, of which the master suite has an en-suite bathroom with separate shower and a dressing room.

The gardens and grounds extend to just over 1.5 acres and are arranged as a more formal garden area, with large expanses of level lawn, magnificent mature trees and a paddock with cob nut trees. From the front, the drive sweeps past the house to one side up to a detached garage with large store/workshop.

Platt Farm is in an attractive setting on the outskirts of St Mary’s Platt with its picturesque church, local pub and primary school. The larger village of Borough Green has a selection of village shopping and the station to London.